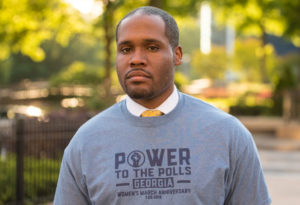 I know Teresa’s track record. She takes the time to know what’s going on in the community. She respects all people and all leaders – traditional and non-traditional. She’s not impressed by ‘the way things have always been done’. She’s not afraid of bold, new solutions. Teresa Tomlinson is a leader for a new day in Georgia, and that is why I am proud to support her as our next U.S. Senator.” — Gerald Griggs