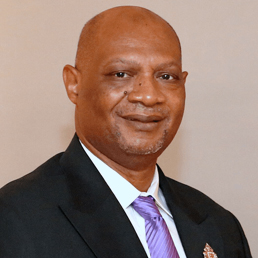 “I am convinced that the best candidate to be the U.S. Senator from Georgia is Teresa Tomlinson, the former Mayor of Columbus, Georgia. In fact, it is her record as Mayor of Columbus that separates her from the other candidates. Under her leadership, Columbus was ranked one of the 25 Best-Run Cities in America. Citizens of Columbus were blessed with a leader whose administration improved the quality of life, addressed difficult issues, and proved herself not only competent but a visionary.”

Bishop Reginald Jackson is the presiding prelate of the Sixth Episcopal District of the African Methodist Episcopal (A.M.E.) Church which encompasses more than 500 churches in the state of Georgia. He was elected and consecrated the 132nd Bishop of the A.M.E. Church in 2012 at the 49th Quadrennial Session of the General Conference. He has served as the chairman of the Social Action Commission of the A.M.E. Church and is the current chairman of the Commission on Colleges, Universities, and Seminaries.

Bishop Jackson was appointed to St. Matthew A.M.E. Church in Orange, NJ in 1981, and during his ministry, the congregation grew from about 75 members to more than 2,800 — including more than 300 children. Under his leadership, St. Matthew instituted more than 30 ministries to meet the spiritual, economic, emotional, physical, and financial needs of the community. The Neighborhood and Individual Development Association (NIDA) was founded, and two new church edifices were built in 1985 and 2002.

Bishop Jackson previously served as the Executive Director of the Black Ministers Council of New Jersey — representing more than 600 black churches from 1994-2012 — and he continues to perform his role as a fierce advocate of social justice. He has personally lobbied the Supreme Court of New Jersey and the New Jersey Legislature to increase spending on poor school districts in the state, provide adequate funding for charity care, end the death penalty, create needle exchange programs, and pass legislation to make racial profiling a crime.

He is married to Christy Davis Jackson.