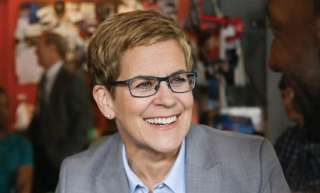 Teresa Tomlinson is the only U.S. Senate candidate who truly understands the infrastructure needs of our state. Our statewide transportation crisis needs urgent attention from Washington. We have gone far too long without leadership in these critical areas. Teresa’s ability to tackle important challenges head on is one of the many things that distinguish her from David Perdue. Join me in supporting Teresa Tomlinson as our next U. S. Senator and let’s give David Perdue a speedy retirement.”

Cathy was a U. S. Peace Corps volunteer in Micronesia. She has held senior executive positions at CARE, League of Conservation Voters, and the Human Rights Campaign. Cathy is currently a public affairs consultant to companies and organizations committed to diversity, inclusion and corporate social responsibility. Cathy and her wife, Karen Geney, have been together for 32 years. They live in the Grant Park neighborhood in southeast Atlanta.