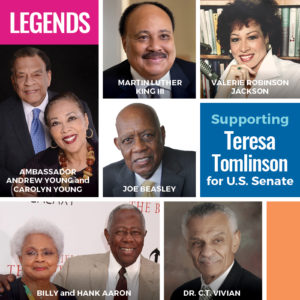 Columbus, GA — Teresa Tomlinson, candidate for U.S. Senate in Georgia, continues to garner support from influential African-Americans across the state of Georgia.

One cannot run for office as a Georgia Democrat without being acutely aware of our state’s political history — one grounded in struggle, protest, and ultimate progress, led by the African-American, faith, and labor communities.

Today, the progress most of us had assumed was settled is once again in jeopardy. From the dismantling of the Voting Rights Act to the threat to in-person and mail-in balloting, there seems to be no end to voter suppression. It is clear that we must finish the fight for equal rights.

“As mayor of Columbus, I had the honor of serving a diverse community that happened to be a minority-majority community. Together, we were able to have an enormous amount of success in tackling complex problems that disproportionately affected the African-American community. I am honored to have received the endorsements of so many civil rights legends and I am eager to continue the fight to build a government that puts the people first.”

As mayor of Columbus, Tomlinson built a government grounded in justice and respect for all people. Under her leadership, Columbus experienced a more than a 40% reduction in crime, a dramatic decline in the unemployment rate, and a 40% decrease in homelessness. Tomlinson instituted broad criminal justice reform including the Rapid Resolution Program which expeditiously resolved non-violent felony charges and reduced jail holding times for lower-grade crimes. She worked to turn around struggling neighborhoods and led Columbus to be named one of the 25 Best-Run Cities in America. In 2014, became the first Columbus mayor to be re-elected in a contested race since 1971, and she carried predominantly African-American precincts by 80% or more.

Tomlinson’s experience in leading one of the more diverse cities in Georgia has garnered her a reputation among people of color for delivering good, just government, and has allowed her to earn the endorsements of a number of leading African-American leaders, lawmakers and activists in the state of Georgia. Her fierce dedication to issues of justice and equality, unwavering commitment to economic prosperity for all Americans, and proven track record of success are why so many leaders have decided to support her campaign.

Ambassador Andrew Young and Carolyn Young
“Carolyn and I fully support Teresa Tomlinson as the next U.S. Senator from Georgia, and we ask all Georgians to do the same. In this moment, Teresa is the change we need to see in Washington, D.C.”

Billye and Hank Aaron
“Billye and I are supporting Teresa Tomlinson for U.S. Senate. I know a power hitter when I see one. Teresa has the fight to stop the dysfunction in D.C. and make it work for Georgians.”

Dr. C.T. Vivian
“My entire life has been dedicated to fighting for equal rights both at home and abroad. I have worked with some of America’s most esteemed and respected leaders, including Dr. Martin Luther King Jr. and President Barack Obama, and I have seen first-hand the kind of leadership that we need to create a more just and equitable society. My career is not only about celebrating the past and how far we’ve come, but also about what we can accomplish in the future and how far we still have to go. I am always looking for the next generation of leaders that will carry the torch and honor the legacies of those who have dedicated, and in many cases, given their lives to advance our cause. I am proud to support Teresa Tomlinson for U.S. Senate because she has proven that she is one of those leaders.”

Joe Beasley
“I have spent my life helping people who live on the margins of society – those that are powerless and need someone to speak on their behalf. Teresa Tomlinson will be a tireless champion for the vulnerable populations not only in Georgia, but across our country. We need someone in DC who understands that we all can prosper – not just some. Join me in supporting Teresa Tomlinson for US Senate. She knows how to make government work for all people.”

Valerie Jackson
“Maynard often said being the mayor of a major American city is the most difficult job in politics. As Mayor of Columbus, Teresa Tomlinson led one of the 25 best-run cities in America. Her years of public service have well prepared her to serve in the U.S. Senate during this difficult time for our country. Join me in supporting this intelligent, accomplished, and determined woman as our next U.S. Senator.”

Martin Luther King, III
“I’m asking you to join me in voting for Teresa Tomlinson for U.S. Senate. True leaders exercise bold action to do what is right. As Mayor of Columbus, Georgia, Teresa tackled tough issues and made transformational change. She made Columbus better through good government, and she will do the same for our state and our country in the United States Senate.”

Teresa has also been endorsed by Democracy for America, the National Organization of Women PAC, and some 50 Democratic leaders and activists from every region and every walk of life in Georgia..