It’s fear that cripples the Democratic Party. Fear of our policies, fear of who we are, and fear of the Republicans. Yes, fear is what has politically cost us in the last many election cycles.

One cannot lead if one is afraid. The thing about leadership is that people want their leaders to be brave. They care less about what you think on the issues than whether you have the moxie to fight for them and the strength of conviction to tell them what you really think. 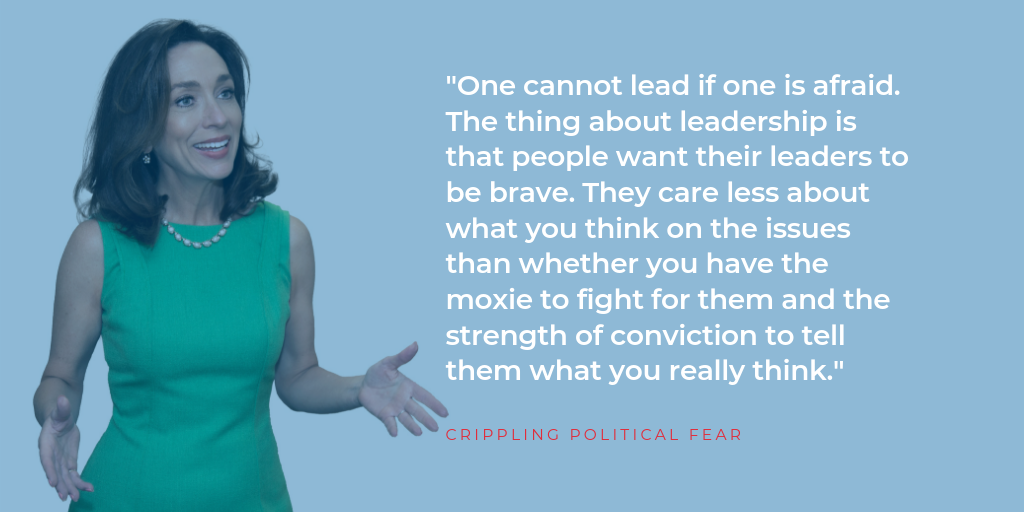 I first ran for Mayor of Columbus in 2010– the Year of the Tea Party. Though the position was non-partisan, it was no secret that I was a Democrat. The more radical, conservative forces of our region thought that needed to be “exposed.” So, the Tea Party, Constitution Party, and Conservative Party sponsored a mayoral debate with that objective in mind. To this day, that debate was one of the most exhilarating experiences I’ve had in politics. I felt like it was the final, marathon rally of Wimbledon. I dismantled Tea Party talking points, explained how their proposals were actually inconsistent with their mantra of so-called small government and pointed out how progressive principles were the better governing, more cost-efficient policies. After the debate, I inadvertently ran up on two older gentlemen who didn’t know I was right behind them. One said, “Well, I don’t like her, but I’ll give her this– she has balls.” Yep, regardless of the errant anatomy reference, indeed, I had shown up, demonstrated political spine and earned his begrudging respect.

The moral of this story is not that I won his vote. I am certain I did not, but he didn’t work against me. The moral of the story is: Tell people who you are and what you believe. They may not agree with you, but they will respect your courage, and that will inoculate you against the single most effective propaganda that Republicans have against Democrats– that we are cowards.

That’s what the Right can’t stand about The Squad. Those women are fearless about their beliefs. They refuse to be bullied, and that is dangerous to the Republican playbook of shaming scared Democrats into milquetoast, mealy-mouthed, baby-splitting positions that are equivocal and stand for nothing. American voters revile those who won’t tell the people what they think. Even if you don’t support the policies– or certainly some of the statements– of The Squad, you can’t deny that you appreciate that they unabashedly tell the world what they think.

A classic example of this crippling Democratic political plague of fear is 2014 Democratic Senate candidate Alison Grimes, who refused to say whether she voted for the leader of her party, the two-term first black president, Barack Obama. And, the legion of Democratic candidates that year who refused to say they supported the Affordable Care Act (ACA), because the polling showed it was unpopular. Did we think any voter believed that a Democrat running for federal office didn’t fundamentally support the notion of providing healthcare coverage for millions of previously uninsured constituents? Our citizens could have used a little leadership from Democratic candidates during that cycle. Our president would have benefitted from the leadership of those Democratic candidates because fear begets disrespect and that disrespect spilled throughout the party and weakened Obama as its leader. Maybe if we had all spoken out and pushed back against the Republican political propaganda machine, we would not have allowed the bell-curve to slide so far right.

The nation has had its share of politically lukewarm Democratic candidates– structured by the national party for perceived winnability not leadership. Even if they had a tagline of– “Fighting for you”– no one believed it. How could they if they didn’t fight for the ACA or weren’t willing to admit America has a gun violence problem?

Imagine if Lucy McBath had taken some poll tested pro-gun proliferation position during her historic run to win Georgia’s 6th Congressional District. No one would have believed her. She had lost her precious son to gun violence perpetrated by an irresponsible gun owner with ready access to a deadly weapon– no mother thinks that’s ok. So, she viscerally and authentically responded with the unmitigated truth and the courage of a woman who has nothing to lose in spreading it. As a result, the voters in an R+8 Republican district believed in her strength, in her earnestness and said– I want you to lead my community.

When Democratic leaders believe that beginning impeachment proceedings is about polls or election results, they, too, are giving in to fear: they are afraid that following the Constitutional checks and balances and leading will cost them their job, so they mitigate and delay. Unfortunately, their job is to lead by upholding the Constitution, not to get re-elected.

Impeachment is not about undoing the last election or impacting the next. It certainly is not about the polls as the Founding Framers made perfectly clear in Federalist Paper, No. 66. It is about stopping a president who would abuse and misuse the power of the presidency so that not another day passes– not another circumstance presents itself– where a president, unfit for duty because of the commission of High Crimes or Misdemeanors (defined as misdeeds) can inflict his/her poor judgment on the office, the country, or the people. Oh, if only impeachment proceedings had been instituted sooner, the damage that might have been averted.

Instead, Democrats are afraid of what the Republicans will say about it– what the bullies will do to us on the way home. So, we cut through the alley to avoid the fight and controversy. We detour our duty of leadership and good government. Commencing impeachment proceedings is about employing the constitutional duty that our elected leaders were sworn to do– not about mitigating to the finish line and hoping no one notices that we wouldn’t use the tools entrusted to us to keep the American system on the rails. All Democrats, and many Independents and Republicans, understand that Donald Trump has committed High Crimes or Misdemeanors, so if this conduct doesn’t warrant the commencement of impeachment proceedings, then what would? We must seriously consider the example of tolerance for harmful conduct at the highest levels of our government we are creating.

The key to winning is that you don’t aim to win, you aim to lead. If you lead, the winning takes care of itself– or at least you move the needle so profoundly you set up the next winner, as did Stacey Abrams in Georgia with her heroic non-loss in Georgia. She was who she was and voters responded to that.