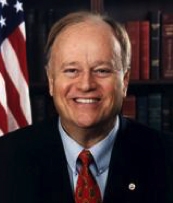 As Mayor of Columbus, Georgia, Teresa also served as head of Public Safety and Homeland Security. She worked regularly with the Army’s Ft. Benning and she holds a National Security Secret Clearance as a result. Teresa understands how to serve the soldier, the military family and the veteran. I’m supporting Teresa Tomlinson for U.S. Senate, because I’ve been there and know what it takes to govern. She’s ready to serve Georgia on Day 1.”

Max Cleland was a U.S. Senator for Georgia from 1997 to 2003. Prior to that he served in the Georgia state senate, as Georgia’s Secretary of State for 14 years and was the administrator of U.S. Veterans Administration under President Jimmy Carter. Cleland is a U.S. Army veteran of the Vietnam War and a recipient of the Silver Star for gallantry in action against an enemy and the Bronze star heroic or meritorious achievement or service.