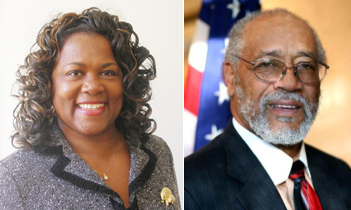 As Maconites, we are well aware of what Columbus achieved while Teresa Tomlinson was mayor. Her good reputation precedes her. We are in desperate need of a proven, effective leader, and Teresa is that candidate. She knows Georgia’s 159 counties, and continues to show that she is the U.S. Senate candidate for all Georgians.”

Elaine Lucas
Elaine Lucas taught elementary school for eighteen years, worked as an elementary and high school counselor for twelve years, and coordinated counseling and advisement for the Bibb County Teen Parent Center for five years. Retiring after 30 years of service to children, she worked part-time for the Bibb School District at Hutchings Career Center as a counselor, graduation specialist, and community service coordinator for an additional eight years. Lucas is a founding member and first president of the Bibb County Voters Registration and Education League, is a member of the NAACP, SCLC, Women’s Political Organization, Democratic Women of Bibb County, Bibb Retired Educators Association, and was a delegate for Rev. Jesse Jackson at the 1984 Democratic Convention held in San Francisco, California. Lucas has served on Macon City Council since 1983.

David Lucas
Senator David Lucas was first elected to the state Senate in 2012 to represent Hancock, Twiggs, Washington and Wilkinson counties as well as portions of Bibb, Houston and Jones counties. Senator Lucas serves as a member of the Senate Appropriations, Economic Development and Tourism, Regulated Industries and Utilities, Transportation and Urban Affairs Committees. Senator Lucas has earned a Bachelor’s degree in Political Science from Tuskegee Institute, a Doctorate from Mercer University’s Medical School, and an Honorary Doctorate of Law from Mercer University. Prior to holding office in the Georgia Senate, Senator Lucas served in the Georgia House of Representatives since 1974. Senator Lucas is a founding member of 100 Black Men and the Al Lucas Scholarship Foundation. He also earned the Distinguished Service Award for Excellence in Political Activities from NYU at Manhattan.