After an Election Night that Was Great for Democrats, Tomlinson Goes Bold in Her Bid for Georgia Senate. 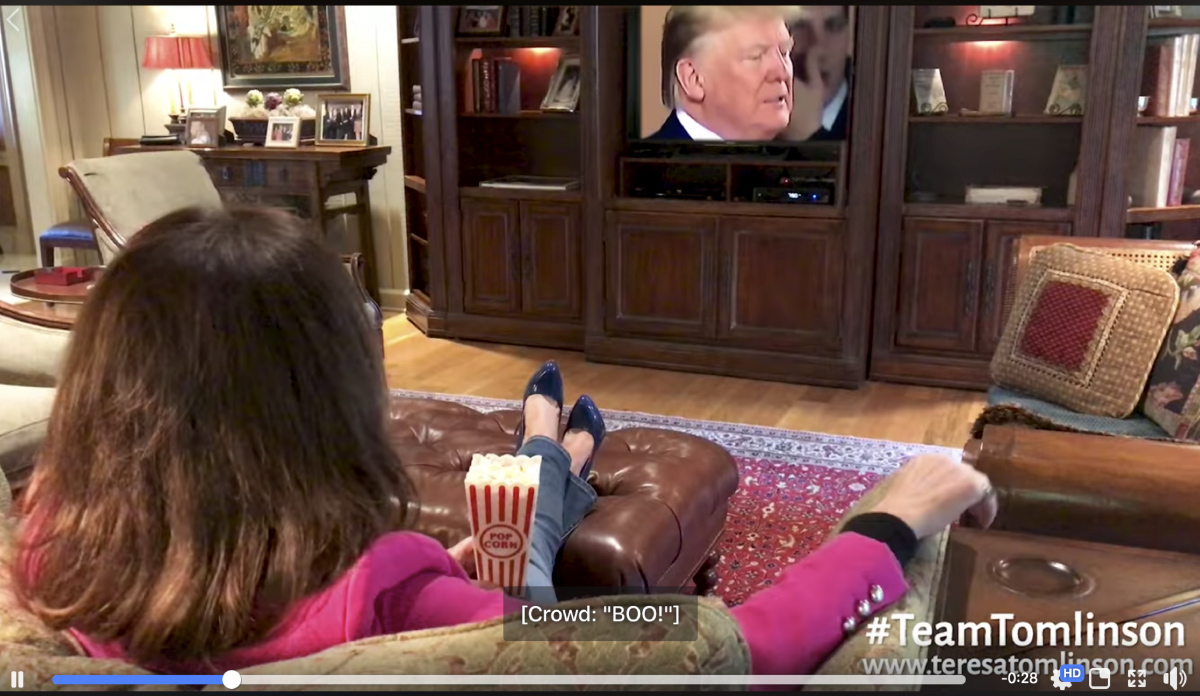 From AJC “The Jolt”

You might be inclined to dismiss the spot as a bit of inconsequential fluff, but such things can be defining. Remember that just last year, Brian Kemp used a shotgun and a pick-up truck to shove his way into a GOP primary runoff for governor.”

The ad opens with a scene of an unidentified woman watching Game 5 of the World Series with high heels propped up on an ottoman. As the television announcer shows Trump being introduced, the crowd “boos,” and the woman is eating popcorn on the couch. When Perdue, seen standing next to Trump, is shown, the announcer says, “He sure looks scared. He looks petrified.”

It is revealed that the seated woman is Teresa Tomlinson when the announcer jokes, “Send in the relief! Send in the mop-up man. Or in Georgia’s case, a woman.”

“Mop-up man” is a sports term describing a pitcher who is brought into a losing game to “clean it up.”

Tomlinson’s ad marks a change in the tone utilized to capture the essence of the campaign as the phrase “pulling the tail of the tiger” is often used in the candidates stump speech. The ad is designed to target women voters, using the hashtags #ElectWomen, #TurnGeorgiaBlue, and #TeamTomlinson.

Spending on political advertisements is projected to hit a new high in 2020, surging to $3.6 billion above the most recent presidential campaign year according to a recent article by Alexandra Bruell, reporter for the Wall Street Journal. TV ads will remain a large component of that ad spend, but there are projections that say that digital spending is projected to grow significantly and surpass television ad spending in 2020.

“We understand the power that digital advertising has to reach our target audience and the campaign has made a strategic decision to meet our voters where they are at,” stated Kendra Cotton, Tomlinson’s Campaign Director..