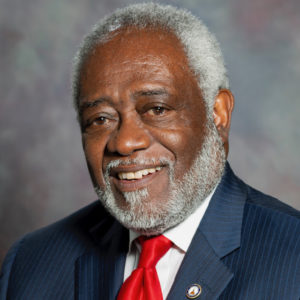 I am supporting Teresa Tomlinson for U.S. Senate because what we need right now is a leader who will fight for us. Teresa strongly believes that government should be a force for good that serves and protects all of us, and during her two terms as mayor of Columbus, Georgia, she proved that she is an effective leader who can effect real change.”

The Honorable Floyd L. Griffin, Jr. currently serves on the Board of Visitors at Georgia College and State University in Milledgeville, Georgia, and as Chairman of the Baldwin Charter System Foundation of Excellent.

Griffin has always been dedicated to public service, and at different points in his life, he has served as a cadet, Vietnam helicopter pilot, Army Colonel, football coach, professor, businessman, and author. He also served on the Board of Trustees of his alma mater, Tuskegee University. In 1994, Griffin defeated an incumbent state senator and became the first African American in modern times to be elected in a rural legislative district where a majority of its voters were white. In 2000, Griffin became the first African American mayor of the Old Capitol City of Milledgeville, Georgia.

To honor his life’s work, Griffin was inducted into the Winston-Salem State University’s “Big-House Gaines” Athletic Hall of Fame and Tuskegee University’s ROTC Hall of Fame. His oral history video is included as a permanent record of the History Makers Collection at the Library of Congress. The Floyd L. Griffin, Jr. papers are held by the Ina Dillard Russell Library Special Collections at Georgia College and State University. Griffin is currently featured in the W.J. Usery Jr. Special Collections Leadership Gallery at the Heritage Hall Museum at Georgia College and State University.