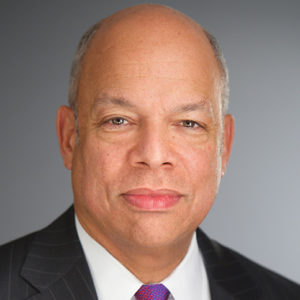 “I enthusiastically endorse Teresa Tomlinson for the United States Senate. As a graduate of Morehouse College, I know Georgia is a special place. Teresa is a native Georgian who all Georgians will be proud to have represent them in the Senate. Teresa is a two-term Mayor of Columbus, who led Columbus to be ranked among the 25 Best Run Cities in America. She is a get-it-done public official for her constituents, and will not waste time with petty partisan politics,” Johnson stated.

“From my own time as our nation’s Secretary of Homeland Security, it is my belief that the #1 obligation of a government is to protect the people it serves,” Johnson continued. “Forged by her experience as Public Safety Director and Head of Homeland Security in Columbus, Teresa understands public safety and cares about the safety and well-being of the State of Georgia and its people. In a time of unprecedented crisis for our country, we need more experienced leaders like Teresa Tomlinson in the U.S. Senate.”

Columbus, Georgia is unlike a number of other cities in the fact that its mayor also serves as Public Safety Director and the Head of Homeland Security for the region pursuant to mutual aid agreements. Teresa Tomlinson held that position for eight years, and she continues to hold a National Security Secret Clearance with the Department of Defense. As such, she headed regional Homeland Security, headed the Emergency Management Agency, and partnered with the Georgia Emergency Management Agency to provide coordinated response to natural and man-made disasters, including threatened epidemics, pandemics, terrorist attacks, tornadoes and more. She directed table-top and field exercises to ensure preparedness. She led the region’s response to a quarantined Ebola case in 2014, and to Category 5 Hurricane Irma, when Columbus was designated as a state evacuation destination for hundreds of Georgians, only to have the hurricane veer off course and directly hit the pan-handle of Alabama and, then, Columbus, GA.

“I hold Secretary Johnson in high esteem. He is a tremendous public servant for our country. I had the honor of serving under his national leadership, which was clear and effective. It is essential that we bring back that proactive, solid leadership to the Department of Homeland Security and as Georgia’s next Senator, I will see to it through confirmation and oversight,” Tomlinson said.

Jeh Johnson has had a distinguished career combining private law practice and senior-level public service, including three Senate-confirmed presidential appointments. In public life, he served as Secretary of Homeland Security (2013-2017), General Counsel of the Department of Defense (2009-2012), General Counsel of the Department of the Air Force (1998-2001) and as an Assistant United States Attorney for the Southern District of New York (1989-1991).

Secretary Johnson is a 1979 graduate of Morehouse College in Atlanta. He received his law degree from Columbia Law School in 1982, and is the recipient of ten honorary degrees. Johnson is a regular TV and op-ed commentator on national issues, and he champions the concept of increasing civility in American politics and dialogue.

Tomlinson was twice elected Mayor of Columbus, each time with more than 60%, in a majority African-American city. She also served as Public Safety Director of Columbus and head of Homeland Security for the region through mutual aid agreements. She holds a National Security Secret Clearance with the Department of Defense. As mayor, she helped propel the city to be named one of the 25 Best Run Cities in America. As a proud Democrat, Tomlinson is strongly pro-choice, supports universal health care, is committed to strong environmental protections to address climate change, supports common sense gun legislation and will fight tirelessly against voter suppression and racial discrimination.

Teresa has also been endorsed by Democracy for America, the National Organization of Women PAC, Asian American Advocacy Fund and more than 50 Democratic leaders and activists from every region and every walk of life in Georgia.