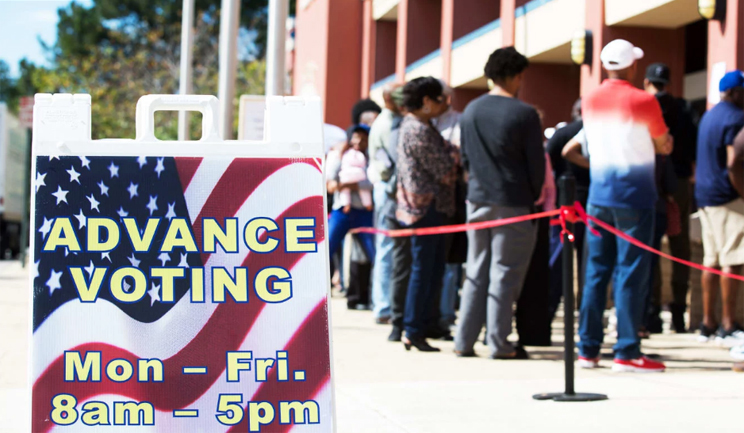 Both parties’ base voters are turning out big. But the numbers suggest something new and very interesting: Rural Democrats are voting this time.

Early voting is well underway in Georgia and it appears voters are shaking the shackles of voting impediments enacted over the 14 years of Republican state domination—the same impediments that have kept a majority Democratic state ruby red.

From shockingly high voter turnout, to an admitted Republican motivation to suppress votes, to a federal judge intervening to ensure no disenfranchisement, Georgia Democrats are winning the midterm battle by the inch. Nowhere is the struggle more obvious than in the race for the state’s next Governor.

Republican gubernatorial nominee Brian Kemp, who is the serving Secretary of State, openly flaunts the one man, one vote mandate of the U.S. Constitution as he proclaims a Democratic ploy to expand the electorate, which he feels compelled to stop by using state power.

The Democratic nominee, Stacey Abrams, is an extraordinarily capable and proud progressive, who has run a campaign maximizing voter turnout and remaining above the fray with a refreshing barrage of substance.

For many years, Georgia has given every indication that it was turning blue. For a time in 2008, Barack Obama had a robust campaign presence in Georgia. By that August, though, he pulled out of Georgia as the possibility of victory failed to materialize. As a result of such false starts, Georgia voting analysis usually invokes the Yogi Berra-esque comment: We will know when we know.

Of the state’s nearly 7 million registered voters, the majority lean Democratic, yet Republicans win statewide race after statewide race. Trends look good, there are bursts of promise and, then, dashed hopes. The problem is that Democrats don’t vote regularly, hence, the Republican effort to remove infrequent voters from the rolls. If everybody exercises their right to vote, the current Republican political monopoly is threatened.

Early voting is going strong in Georgia. We see that over 40 percent of the early voters are minorities where Abrams is thought to dominate. A solid 30 percent are African-Americans where Abrams enjoys over 90 percent support. Also important is that infrequent voters are coming out in this midterm when we typically only see them during presidential elections. Some 30 percent of Georgia early voters are so-called non-voters, which is defined as new or infrequent voters.

Of the so-called non-voters under 40 years of age, more than 77 percent of early voters under 40 did not vote in the last midterm. This demographic is believed to strongly favor Abrams, and so far, they represent over 118,000 new or non-voters. In addition, minority voters, an Abrams base, are solidly represented in the category of non-voters with some 179,000 recording early votes so far.

All of this is important because in Georgia there is usually only a 200,000 vote differential between the winner of the statewide race for governor and the loser (out of around 2.5 million cast). Assuming both sides crank out their respective bases, as the numbers suggest they are, these new or infrequent voters will decide this election.

Abrams has invested in the black belt and worked every county in Georgia for the first time in decades.

Another interesting trend is the sheer magnitude of the turnout where Abrams needs it. Of the top 10 most populous Georgia counties, eight are solidly Democratic with blue supermajorities in Fulton, DeKalb and Clayton counties. These eight Democratic counties produced nearly 1 million votes for Hillary Clinton in 2016, while the only two Republican counties in the top 10 went for Trump with 151,000 votes. Note that the last Georgia Governor won the state with 1.34 million votes.

What has saved Republican majorities in Georgia for the past 14 years is the cumulatively significant rural turnout. Democrats have relied on the populated urban counties and have needlessly surrendered to Republicans the voter-rich areas in Central and South Georgia. This is particularly true for the Georgia black belt (a reference to the fertile soil).

The black belt constitutes approximately 50 counties in central Georgia stemming from Columbus in southwest Georgia through Macon to Augusta on the South Carolina line. Columbus, Macon and Augusta make up the largest non-Atlanta urban areas in the state. The other counties in this region range in size, but many are sparsely populated.

These black belt counties are diverse, ranging from 40 to 60 percent in minority population. Half of these 50 counties regularly go blue, yet there is potential not previously cultivated by the state Democratic Party or its candidates.

I’m a Democrat, a twice-elected countywide mayor in Georgia’s black belt. Other progressive-minded or Democratic leaders are solidly elected to top positions throughout this non-Atlanta region. I can attest to the fact that these voters just want good government, and many are sick of the shtick Republicans offer.

So, I have often wondered: what if the statewide candidates showed these voters a little love and tried to turnout the Democratic vote in the black belt, thereby shaving those rural red voting margins? Abrams has seen this opportunity, too. She has invested in the black belt and worked every county in Georgia for the first time in decades. As a result we seeing an over 300 percent increase in early voting in heavily Democratic urban counties like Clayton, and we are seeing big increases throughout the black belt.

Early voting numbers are reflecting the type of voting intensity Abrams needs precisely where she needs it. Should Abrams be able to pull out a victory on November 6 as the table is set for her to do, not only will she create history by being the nation’s first African-American female governor, she will have set an easy to replicate course for waves of Democrat statewide candidates. We’re not talking a blue wave in Georgia. But we are talking a reset of the political water table.