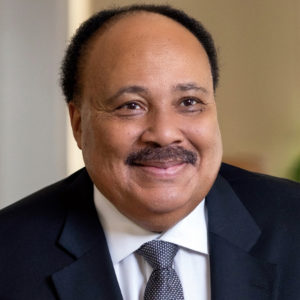 Columbus, GA — The Tomlinson campaign is excited to announce that Martin Luther King, III has endorsed Teresa Tomlinson in her quest to win the Democratic primary and defeat David Perdue.

“I’m asking you to join me in voting for Teresa Tomlinson for U.S. Senate. True leaders exercise bold action to do what is right. As Mayor of Columbus, Georgia, Teresa tackled tough issues and made transformational change. She made Columbus better through good government, and she will do the same for our state and our country in the United States Senate,” King stated.

In 1997, King was unanimously elected to head the Southern Christian Leadership Conference (SCLC), a civil rights organization his father founded. King was the fourth president of the group, which sought to fight police brutality and start new local chapters during the first years of his tenure. King is a former President of the Martin Luther King Jr Center. During his tenure, he launched and spearheaded the digitization and preservation of the papers of his father to make them more assessable to the world.

King is a member of Alpha Phi Alpha fraternity, as was his father. He received his B.A. degree in political science from Morehouse in 1979 following his father’s footsteps. In February 2008, Martin Luther King III married longtime partner Arndrea Waters. On May 25, 2008, the couple had a daughter, Yolanda Renee King, the first and only grandchild of Martin Luther King and Coretta Scott King.

“One cannot run for office as a Georgia Democrat without being acutely aware of our state’s political history — one grounded in struggle, protest, and ultimate progress, led by the African-American, faith, and labor communities,” Tomlinson stated.

“Today the progress most of us had assumed was settled is once again in jeopardy. From the dismantling of the Voting Rights Act to the threat to in-person and mail-in balloting, there seems to be no end to voter suppression. It is clear that we must finish the fight for equal rights. I am humbled to have the endorsement of Martin Luther King, III,” Tomlinson continued.