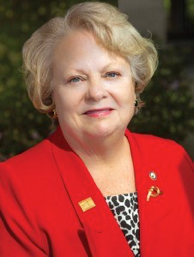 Voters are exhausted with the daily barrage of controversy coming out of Washington, D.C. People want to make government work. As the effective Mayor of Columbus, GA, Teresa Tomlinson knows what good government looks like and she knows how to run it. We need that in Washington. Join me in supporting Teresa Tomlinson for US Senate and let’s send Perdue packing.”

Mary Margaret Oliver is a lifelong resident of District 82 in DeKalb County and has served in the Georgia General Assembly in both the House of Representatives (1987-1992) and 2002 – present, and the Senate (1993 -1998). Her past legislative accomplishments have included authoring and passing significant legislation for the protection of children and consumers, including Georgia’s anti-stalking law, along with legislation to protect neighborhood activists from intimidation. Prior to her elections, she practiced law, was an administrative law judge and an Associate Magistrate Judge.