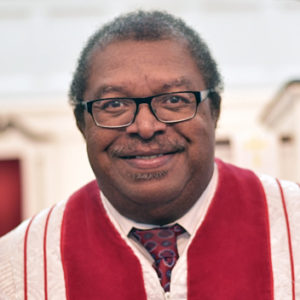 I have dedicated my entire life to serving others. I have worked with people all over the world to make enormous improvements in areas such as social justice, economic empowerment, and criminal justice. I am supporting Teresa Tomlinson because I have seen her fierce devotion to the values of equality and justice. She has fought her entire life to build a prosperous government that works for all people and the United States Senate is in desperate need of a leader who will fight for all of the people, not just some.”

He founded the African American Ministers Leadership Council, and he serves as president of the African American Ministers In Action of People for the American Way. He previously served as special assistant for community concerns for Mayor Maynard Jackson and as national director of Operation Breadbasket and Special Projects for the Southern Christian Leadership Conference (SCLC). Additionally, McDonald has received the Gandhi, King, Ikeda Award, the Liberty Bell Community Service Award, and the J.O. Perterson Education Award.