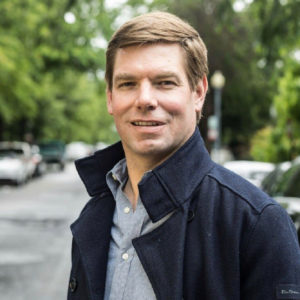 Rep. Swalwell is a national leader in the Democratic Party. Using Congress’s historic power of checks and balances, he is fighting to rein in the Trump administration on issues ranging from abuse of power to the president’s dismissal of Inspectors General. He was a leader in the hearings leading to impeachment. In 2018, inspired by all the energy and determination he was seeing across the nation, Congressman Swalwell set out to amplify and fund some of the best young candidates in the country by leading the Future 40 efforts. Out of the 40 seats he identified as competitive, nearly 73% were won, allowing the Democrats to take the majority and pass needed progressive legislation.

Recognizing that flipping the Senate and unseating Mitch McConnell as Majority Leader is necessary to enact any legislation the House has passed, Swalwell has now set his sights on helping to flip U.S. Senate seats where Democrats can win, if the right candidate is selected.

In announcing his endorsement of former Columbus, GA, Mayor Teresa Tomlinson in her bid to win the Democratic Primary and take on David Perdue, Swalwell stated:

“I am honored to have the endorsement of Congressman Eric Swalwell. In 2018, he had a knack for picking winners, and we believe he has done so again by recognizing that our campaign is strategically positioned to unseat David Perdue,” Tomlinson stated.

“History will be made in Georgia in 2020,” Tomlinson continued. “Stacey Abrams, amidst a sea of voter suppression, narrowly lost her quest to become Georgia’s governor by 1.5%. Trump barely won a majority of the vote in Georgia with 50.4% of the vote, and Perdue’s favorability is at 47%. Georgia is a 2-point state, and with the support of Congressman Swalwell and so many others, our team is poised to defeat David Perdue.”

Eric Swalwell was elected in 2012 to represent California’s Fifteenth Congressional District, which includes a large part of the East Bay. Now in his fourth term, he’s working hard to bring new energy, ideas, and a problem-solving spirit to Congress, with a focus on advancing policies that support equality, opportunity, and security. Swalwell mounted a 2020 Presidential bid in which much-needed reform of our guns laws became his signature issue.

Learn more about Teresa at teresatomlinson.com/meet-teresa.