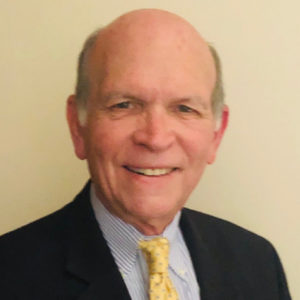 I have seen many leaders through the years, and Teresa Tomlinson has the traits of an effective leader. She combines knowledge and experience with a sincere concern for others. She is an energetic problem-solver. Her leadership resulted in Columbus being named one of the 25 Best Run Cities in America. I look forward to her being one of our Senators in Washington representing all the people of Georgia. In these times, we need Teresa Tomlinson in the United States Senate.”

A Georgia native, Tom Sherrill grew up in East Point. His father was a decades-long member of Amalgamated Transit Workers Union, Local 732. After attending public school in Fulton County, Tom earned a BA degree at Georgia State University and a MA degree from the University of Virginia. He and his wife Dianne have been married for more than fifty years.

Tom served more than four years both in the United States and abroad in the U.S. Army’s Military Intelligence branch. He left the Army with the rank of Captain.

Tom was a co-founder in 1984 of Sherrill & Hutchins Financial Advisory and, although retired, still serves on its board of directors.

In 1990, Tom was elected to the Georgia House of Representatives and served eight years. He represented part of DeKalb County and was particularly involved in issues affecting older citizens and children with special needs.

Tom was appointed to the Georgia Council on Aging by the Governor of Georgia. Tom served as board chair of the Georgia Chapter of the Alzheimer’s Association and has been on the boards of KIPP South Fulton Academy and the Thanks Mom & Dad Fund. He and his wife Dianne are active members of their parish’s St. Vincent de Paul Conference, which aids individuals and families undergoing financial stress. Tom and Dianne are long-time members of Our Lady of Lourdes Catholic Church, which is located in the King Historic District.