Originally published in The Brunswick News 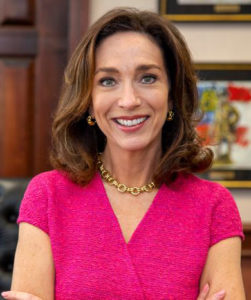 Conventional wisdom has it that the race for David Perdue’s U.S. Senate seat will be expensive and close.

Former Columbus Mayor Teresa Tomlinson said in an interview Wednesday with The News that she was ready to take on the one-term Georgia Republican.

Tomlinson is one of several Democrats running for the opportunity to face Perdue and feels she’s the right candidate for the job. For starters, she’s won elections. Tomlinson survived a multi-candidate, heated campaign to win her first mayoral race with 68 percent of the vote. Four years later she won reelection with 62 percent.

Tomlinson said her experience as an attorney in federal courts, winning cases involving the rich and the powerful, guided her decision to do what she could to make Columbus a better place to live without running off the people who lived there.

“I actually ran for office because the good people we had in leadership and the structure we had was very reminiscent of the 1970s community leadership structure,” Tomlinson said. “And it did not meet well with the African-American community majority that we had, and I felt that there was civic unrest afoot.”

They complained that city failed to represent their interests.

“There was a lot of that going on,” she said.

Among the accomplishments she cited was facilitating the growth of engaged neighborhood groups that grew political muscle among average residents, and projects like developing 66 miles of alternative transportation trails so people no longer needed a car to get around in some areas of town.

Tomlinson said Perdue has failed on his top issue, which is the national budget.

“He said he was going to go to Washington, D.C., and solve the budget deficit,” Tomlinson said.

She said the budget has increased substantially since Perdue joined the Senate.

“That’s not me saying it,” she said. “That’s the Office of Management and Budget. It was those tax cuts that he passed, that he championed, that he helped push through that actually ballooned our deficit, and grew it three times in size. So, he’s utterly failed in the singular premise that he presented.”

She also pointed to where Perdue calls himself the president’s co-pilot.

She said while China’s been a bad actor on the international trade scene, there were ways to go about bringing the country into compliance with trade rules.

“But the false bravado of this trade war, and a lack of appreciation for the ramifications it would bring about, came to rest at the feet of our farmers,” Tomlinson said. “Agriculture is the No. 1 industry in this state.”

She said bankruptcy spikes and suicide spikes among farmers because of the despair in their industry impacts more than the individual and their families. “It’s the entire community that depends on the agricultural economy.”

She said one of the reasons the state legislature is having budget trouble may be because of the Trump administration’s trade policy.

Other Democrats seeking to the party’s nomination include Jon Ossoff, who lost a special election for the 6th Congressional District in 2017. He’s raised more than $1 million in the last quarter and has close to $1.5 million in campaign funds.

Another Democrat in the running is former state lieutenant gubernatorial nominee Sarah Riggs Amico, who brought in more than $502,000 in the last quarter and has more than $472,000 in her campaign chest.

Tomlinson has more than $319,000 on hand after raising more than $527,000 in the last quarter and spending more than $500,000. She’s working to build inroads in traditionally Republican areas — along with voter-rich areas in the Atlanta suburbs for the few hundred thousand votes it takes to flip the seat. That costs money, she said.

Perdue raised more than $1 million in the last quarter and spent more than $315,000 and has more than $7.8 million to spend on reelection.

Tomlinson said she expects both sides — campaigns and independent groups — to spend around $20 million each on this year’s general election.

Tomlinson was in Brunswick for an event with local Democrats.

Read the original article on The Brunswick News website.