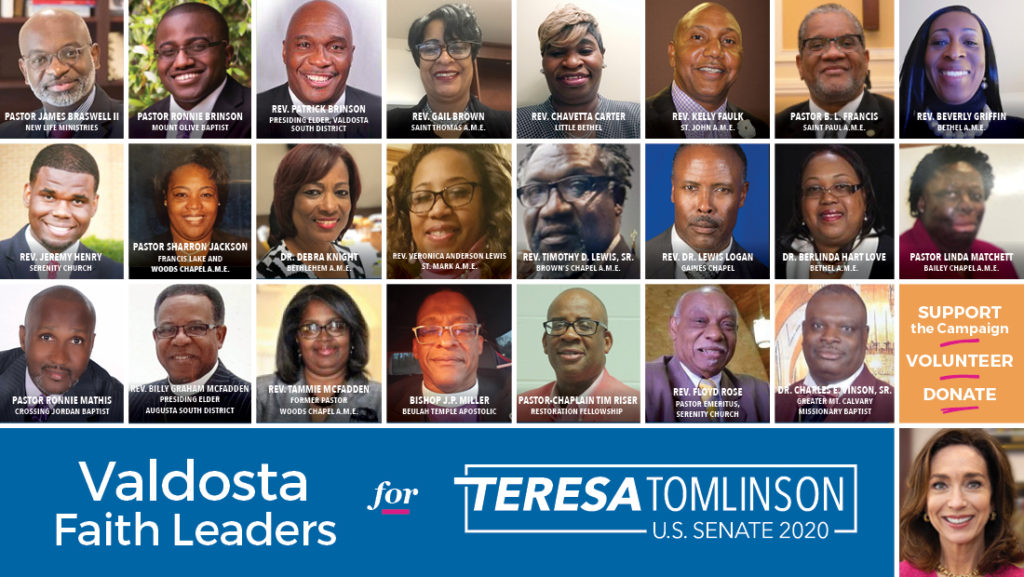 As we move closer to the June 9 primary election, the Tomlinson Campaign is happy to announce the endorsement of 23 Valdosta, Georgia faith-based leaders. Georgia is a state where the Black church also has been a prominent civic institution for centuries, building community and supporting human and civil rights. Church leaders and congregations are an important piece of Get Out the Vote (GOTV) and other voter information efforts.

“People of faith make a large difference in our elections and I am honored to receive the backing of such an influential group of Georgians. It has been our mission to make this a campaign not only by Georgians, but for Georgians,” Tomlinson stated.

“The support of these faith-leaders gives me the confidence to know that we are moving in the right direction. We do not take their faith in our campaign lightly. The failure of civic leaders lands right at their doorstep with poverty and disenfranchisement. When elected to the U.S. Senate, I know that it will be their prayerful blessings that helped us to get there,” Tomlinson continued.

Tomlinson was twice elected Mayor of Columbus, each time with more than 60%, in a majority African-American city. She also served as Public Safety Director and head of Homeland Security, and she holds a National Security Secret Clearance with the Department of Defense. As mayor, she helped propel the city to be named one of the 25 Best Run Cities in America. As a proud Democrat, Tomlinson is strongly pro-choice, supports universal health care, is committed to strong environmental protections to address climate change, supports common-sense gun legislation, and will fight tirelessly against voter suppression and racial discrimination.

Teresa has also been endorsed by Democracy for America, the National Organization of Women PAC, Asian American Advocacy Fund, and more than 80 Democratic leaders and activists from every region and every walk of life in Georgia.