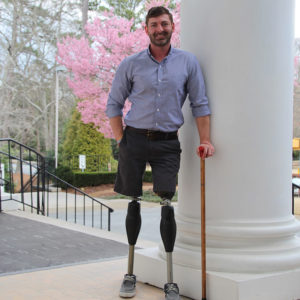 Resolute. Tenacious. Winner. – This is how I’d describe Teresa Tomlinson. To unravel the deadlock in DC it is going to take someone with governing and policy experience. Teresa Tomlinson says what she means and means what she says. She represents my values, Georgia’s values, and the values of a fair and honest America. She is the person we need to send to DC to relieve David Perdue of his duties.”

Dan Berschinski, a graduate of West Point and a former Army infantry officer, was born and raised in Georgia. He is the president of Two-Six Industries, which he founded after being wounded by an improvised explosive device while leading his platoon just outside of Kandahar, Afghanistan in 2009. Lieutenant Berschinski, or “Two-Six” as he was known by his call sign, survived to spend two years of care and rehab at Walter Reed Army Hospital. After recovering from his wounds, he medically retired from the Army in 2012 and then went on to earn an MBA from Stanford University. From 2012 to 2018 he served on the board of the Amputee Coalition, America’s largest amputee-focused nonprofit. Dan now lives and works in Atlanta.