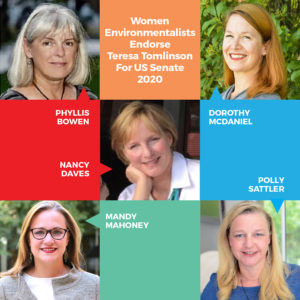 Whether it’s sustainable planning, energy efficient transportation systems, protecting Georgia’s natural resources or boldly addressing our climate crisis, Teresa has led the way in environmental stewardship. Teresa has the knowledge and the courage to take on climate deniers, dangerous deregulators and hand wringers in order to find solutions to our imminent challenges. We always stand with the environment, and that means we stand with Teresa Tomlinson for U.S. Senate.”

Phyllis Bowen worked at The Sapelo Foundation from 1992 until her retirement in December of 2016, having served as the Executive Director for 19 of those years. The Sapelo Foundation promotes progressive social change affecting vulnerable populations, rural communities, and the natural environment in the state of Georgia.

Dorothy McDaniel is the Executive Director of Trees Columbus, Inc. Trees Columbus is a non-profit, member organization dedicated to planting, preserving, and protecting Columbus’ tree canopy. Prior to working for Trees Columbus, Dorothy was a Project Manager for the Georgia Conservancy. Before moving to Columbus, Dorothy managed land use and comprehensive planning for the Baton Rouge City-Parish Consolidated Government. She is a graduate of the Institute for Georgia Environmental Leadership and a recipient of the Keep Columbus Beautiful Community Leadership Award.

Nancy Daves is an International marine conservation professional active in environmental and political issues in Georgia and Florida. She served as the Senior Marine Resource Officer for the National Oceanic & Atmospheric Administration for more than 20 years.

Mandy Mahoney is the president of the Southeast Energy Efficiency Alliance. Prior to joining SEEA in 2011, Mandy served as the inaugural Director of Sustainability for the City of Atlanta under Mayors Reed and Reed. She serves on the boards of the Piedmont Park Conservancy, the Turner Environmental Law Clinic, and the American Council for an Energy Efficient Economy.

Polly Sattler is a Senior Sustainability Planner for Hartsfield-Jackson Atlanta International Airport. Her work includes managing the airport’s Climate Action Plan to reduce the airport’s Greenhouse Gas emissions by 20% from 2008 levels by 2020, developing a Green Stormwater Infrastructure program for new construction, implementing a Green Purchasing Plan and identifying opportunities for alternative fuel use at the airport.